As a crafter, one of the main problems I run into is that I want everything I see, but then I usually end up hoarding the majority of it because it's "too pretty to use" or "I thought it looked cool, but I don't know what to do with it yet."

Thankfully, that wasn't the case with a present for a friend of mine for her birthday! I saw the Tim Holtz Assemblage Clock and immediately knew I had to do something with it for her!

Back when I first tried my hand out at making mini albums, I used the same friend as a guinea pig. She had just gotten married so I used Prima's Tea Thyme collection and made her a simple 6"x 6" wedding album. 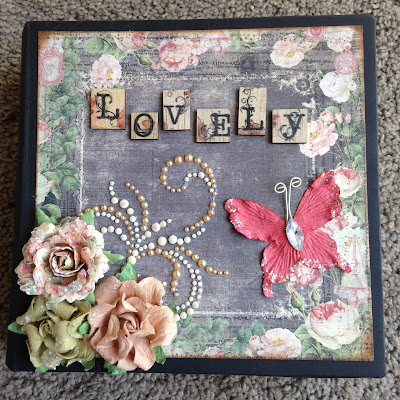 After I made that album (3 years ago) I put the paper away and didn't touch it! It fell into the category of "too pretty to use" until a couple of weeks ago.

I started out taking the clock apart and giving the whole inside and outside a few good layers of gesso. Then I used a brush to dry brush on a couple coats of Shimmerz Coloringz in Oh Say Can U Sea. The color wasn't exactly what I was going for, so I decided to layer on a couple of coats of Shimmerz Spritz Bamboo Leaf to get this specific color. 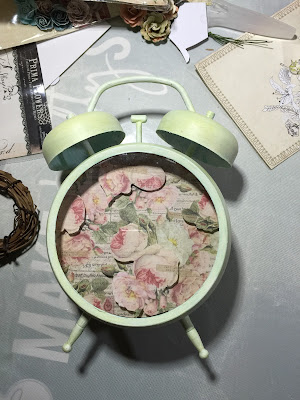 I used two of the same sheets of paper for the inside of the clock. One, I just trimmed in a circle for the background, and then the other one, I matched up flowers and fussy cut (blech!!) the flowers out to add dimension. Then it came time to play around with the inside scene! 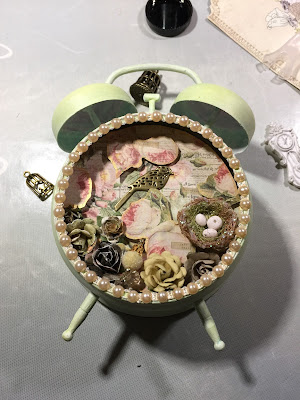 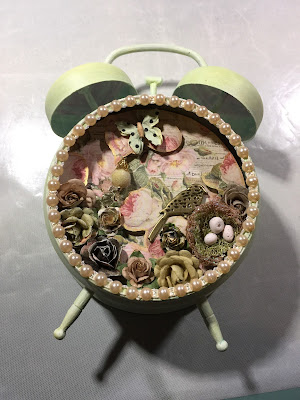 When I was satisfied, I glued it all down to the background and carefully placed the back of the clock back on. I decided I didn't want to go too crazy on the outside as my friend prefers less craziness in her decor than I do =) I grabbed a couple of different styles of string/ribbon and tied it to one of the bells. I used another bauble to hang from the string, as well as a birdcage. I also added a couple of flowers and a stray pearl to the bell, and called it done! I was quite pleased with how it turned out - and I think my friend was too! 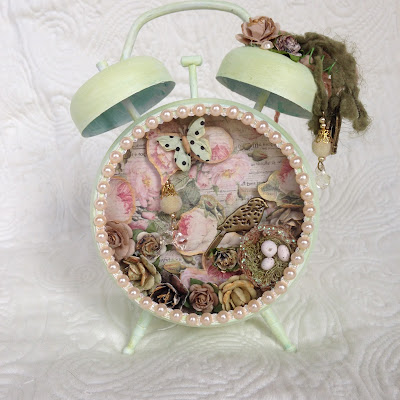 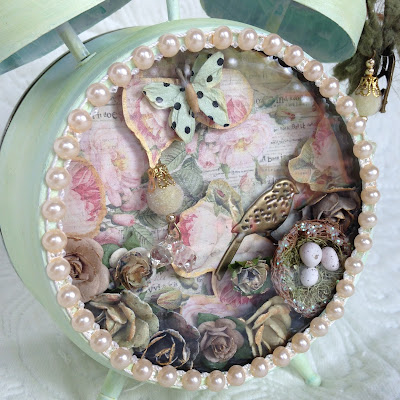 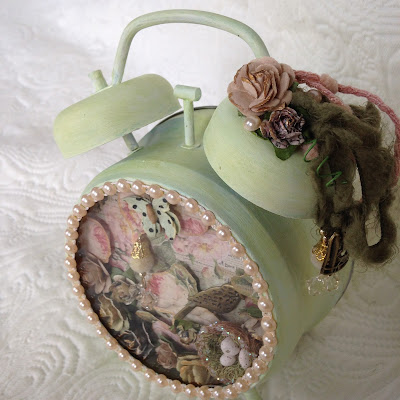 I have a few craft fairs coming up so I will be working as often as my 3 year old lets me! :)